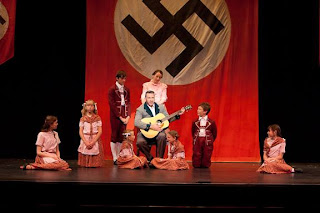 The remarkable story of the Von Trapp family's escape from an occupied Austria in 1935 is heart-warmingly familiar, as are the characters, scenes and songs from this time-honoured Rogers and Hammerstein musical, which has a special place in so many people's hearts.  This feel-good show, made a cult classic through the ever popular Julie Andrews film version, is brought sparklingly to life in the Civic by a hard working cast.

Production values are high with some delightful design throughout, particularly the wedding at the Abbey and that beautifully framed final moment on the mountain.  Some winning costume choices too, the congregation of monochrome nuns, the children looking adorable in their curtain-esque play clothes, Maria in a beautifully fitting wedding dress.  The sound levels however were disappointing, the beautifully sung harmonies of "Preludium" at the opening spoilt by volume mismatches and sections of dialogue missed through tardy cues.  The follow-spot cues too should blend into the scene unnoticed by the audience but they became a distraction at times.  With so many scene changes into various locations the organisation of the stage management was important, and although executed smoothly there were too many periods of dark silence - a simple underscore could help to make the waiting time less obvious and would be effortlessly manageable by MD Ian Myers and his flawless band.

Kayleigh McEvoy was glorious as the effervescent Maria, characterised to almost Disney-fied appeal she was full of energy with an ease and grace throughout.  Her singing voice was magnificent as the demands of this almost non-stop role were met with skill and confidence.  A real talent, Kayleigh will be an asset to her Classical Singing course at Guildhall next year.  Mat Smith was solid as her handsome suitor Captain Von Trapp, singing "Edelweiss" with enough charm to win the audience over into a patriotic singalong.  Catherine Gregory's classy rendition of "Climb Every Mountain" matched her tender characterisation of Mother Abbess, ably flanked by Nicola Myers, Natalie Schultz and Sara Mortimer as the Sisters asking "How do you solve a problem like Maria?".  For me, there were standout performances of the hateful Baroness from a wonderful Olivia Gooding, whose effortless acting style made for a refreshingly natural performance, and Barry Miles as a genial Uncle Max in a witty and engaging characterisation.  Given the two musical numbers that did not make the film version, they had a tough job to win round an expectant audience, which both actors achieved with captivating skill.  The children, selected from the society's talented youth group Offspringers, were enchanting.  Mae Pettigrew's elegant Liesel, Bethan Evans' confident Brigitta and Bernice Bushell's smiling Marta all delightful alongside their capable and enthralling on-stage siblings.

Another accomplished show from this friendly society, who do themselves proud with the bonded ensemble feel to their accessible productions.  Another chance for the Offspringers to join in too perhaps as we look forward to their next production, Whistle Down the Wind.