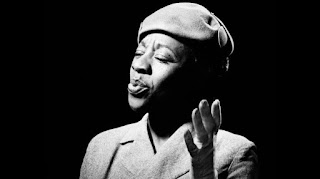 The National Theatre's latest production of James Baldwin's The Amen Corner has generated a captivating piece of epic scale theatre under the direction of Rufus Norris, despite the script taking somewhat too long to get going.

We join a Sunday morning service with pastor Sister Margaret preaching to her enrapt congregation in their shabby upstairs tabernacle, her style fierce and righteous, until we gradually begin to see her life disintegrate around her.  Unexpectedly, her deserted husband Luke arrives, bringing with him memories of past tragedies and instigating her only son's decision to fly the nest and become a Jazz musician rather than following in her footsteps.  Meanwhile, rather than supporting her through this difficult time, her congregation turn on their pastor, seeing only hypocrisy in her years of pious teachings.  The piece is overridingly cynical, almost parodying the excessive fervour of these followers, although manages never to be patronising.

Some glorious choral gospel singing woven and blended into the spoken passages are integral to the overall tone of the production, and there are some accomplished performances to draw the audience into this corner of 1950s Harlem.  Marianne Jean-Baptiste is glorious as Sister Margaret, seeming to relish in her return to the British stage.  Her sister Odessa is played with effortless charisma by Sharon D Clarke, and Cecilia Noble gives a fantastically memorable performance as Sister Moore.

An impressive production that very much succeeds in production values and performances.  Although it is somewhat let down by a wordy script that takes too long to make it's point, there is too much to enjoy for this to be a hindrance to an entertaining evening.