CHARLIE AND THE CHOCOLATE FACTORY 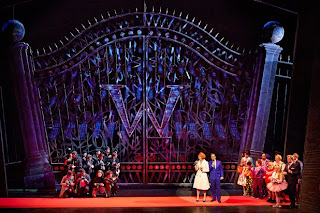 One of Roald Dahl's most popular stories, Charlie and the Chocolate Factory enjoys a lavish new interpretation as a full-scale musical written by Marc Shaiman and Scott Wittman, Book by David Grieg and directed by Hollywood legend Sam Mendes.  Set to delight audiences with it's big budget production values this is one of the most anticipated new musicals of the year.

Opening with a projected animation of glorious Quentin Blake illustrations describing the manufacturing process of the humble chocolate bar, we are then welcomed into the life of the Bucket family.  All four grandparents in one bed, holes in the roof, cabbage soup for dinner and a television run by an exercise bike, the staging is entirely reminiscent of Dahl's original descriptions and somehow works cleverly as both a cramped slum and enormous stage-filling set.  As the Golden Ticket competition is announced we meet the other ticket winners one by one, each individually characterised with their own musical style.  It isn't until the close of the act that we first meet the unnervingly odd confectioner himself, Willy Wonka, who welcomes the children and their guardians through imposing gates large enough to keep out the BFG.  The second act is then devoted to their tour of the factory: the Chocolate Room, the Inventing Room, the Nut Room, the Television Room and, of course, the Great Glass Elevator, all wonderfully brought to life with some staggering set changes carried out behind projected images of corridors allowing the action to continue to flow seamlessly.

Performances are top-notch with a stand out turn from Douglas Hodge as the sinisterly charming Wonka.  Energetic with a comedic glint in his eye he gives a beautiful rendition of the classic 'Pure Imagination' from the original 60s film.  Nigel Planer is bumblingly lovable as Charlie's endearing Grandpa Joe flanked by an excellent trio of other grandparents, whose dance routines from their hilariously flexible beds were joyously entertaining.  Little Charlie Bucket himself was given a sweet characterisation by Louis Suc, an absolute star who captured the innocence and integrity of Charlie perfectly.  It is the Oompa-Loompas who steal the show for me however, the staging of which has been kept a tightly held secret and didn't fail to deliver on comedy and ingenuity.

This is a wonderfully entertaining production that children are bound to adore.  It's biggest challenge however will be the stiff competition from the other Dahl-based new musical that is already gracing the West End and Broadway, and enjoying every deserved moment of glory.  Matilda the Musical is vastly more intelligent in every way: more intelligent humour that will appeal to parents as well as their children, a more intelligent score that delights and surprises at every turn, a more intelligent set that uses smaller, simple shifts in lighting and pop-up items from the ingenious stage floor to create as much impact as a full set change, even a more intelligent protagonist in the wonderful little genius Matilda compared to the smiling naivety of the day dreaming Charlie.

This isn't to say that Charlie and the Chocolate Factory fails because of it's relative simplicity; 'clever' theatre isn't what everyone is looking for.  The relatively old-fashioned glitz and impressive scale of this production will be what appeals to some, and it does it completely brilliantly.  Both shows are well worth a see if you can afford it, and hopefully will both be around for some time to come.