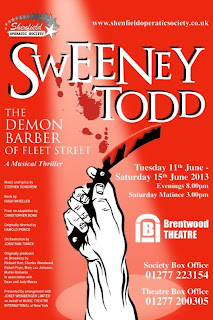 Sondheim is a notoriously tricky composer to deliver, and Shenfield Operatic Society's courageous choice of Sweeney Todd must have presented an array of challenges.  Recently revived by the Chichester Festival and then enjoying an acclaimed West End transfer just last year, stars Michael Ball and Imelda Staunton both won awards for their memorable performances as the bloodthirsty barber and his encouraging co-conspirator.  Big inspiration for Shenfield as they embarked on this tricky project.

The intimacy and flexibility of the Brentwood Theatre auditorium allows for an imaginative approach to the staging, the enormous revolving cube dominating the space creating an essential upper level as well as an ominously overbearing shadow across the acting space.  The well constructed chair and trapdoor worked smoothly, and the stage was well managed to ensure the correct cube positioning and furniture placement was carried out efficiently within the timing constraints of the music.  The separate platform used for Johanna's room was not to the same standard however; the decoration and furniture chosen not nearly grand enough for the rich, powerful Judge Turpin's home.

Some costume worked well, with Todd and Mrs Lovett both ideally dressed, and the Beggar Woman particularly good with some excellent make-up.  However there were some noticeably ill-fitting items which were worn uncomfortably, and considering the regular reference to Johanna's hair the wig looked very untidy.  There was some nice use of lighting, especially during the split scene of "Kiss Me" toward the end of Act 1 and to evoke the seaside during "By the Sea".  The sound levels were also good, and the band worked extremely hard throughout this sung-through show to produce an excellent quality of musical accompaniment, under the leadership of Adrian Ure as Musical Director.

An enthusiastic chorus did a particularly good job with the tricky score, rousing in the opening "Ballad" and the repeated echoes throughout.  At particular moments the ensemble moved as one, creating an eerie tone for this atmospheric piece.

This commendable chorus work backed up a sharp cast of principals, led by David Pridige in the title role.  Sweeney Todd was played with a vengeful, dramatic concentration in an engaging interpretation with a vocal performance to match.  Kerry Cooke shone as Mrs Lovett, her ready smile becoming chilling as she reveals her enterprising idea, and on picking up the timing her sparkling soprano was glorious.  Ian Southgate was superb as sailor Anthony, his beautiful voice making the tricky switches in range and pace seem easy; a captivating characterisation.  His Johanna, played by Lauren Ramshaw, brought a wide-eyed and slightly wild fear to the role, handling the timing well despite struggling with some of the notes.  Joanna Hunt played young Tobias, a boy's role often played by a girl, and despite her voice not quite managing the power to sing above the crowd during the Marketplace scene, she did a heart-wrenchingly charming job with "Not While I'm Around" in Act 2.  Judge Turpin was given a fittingly creepy characterisation by Hugh Godfrey, whose concentration was evident although it held him back somewhat from really absorbing the character.  Quite the opposite was true of David Ward, who entirely embodied The Beadle creating a slimy and genuinely hateful character and singing with confidence and skill.  The tough operatic role of Pirelli was taken on by Rick McGeough, whose characterisation was well studied despite the vocals required not suiting his range.  Louise Byrne did a commendable job as the Beggar Woman, her beautiful singing voice soaring and her frantic physicality suiting the part well, although her diction tended to slip in the small sections of dialogue becoming difficult to understand.

This was an enjoyable and accomplished production, directed by Louise Hunt, which must have proven a challenge to all involved.  A worthwhile step away from the usual lighthearted fare of amateur musical theatre, and one that certainly entertained throughout.

Posted by @LauraKathrynBen at 8:00 pm