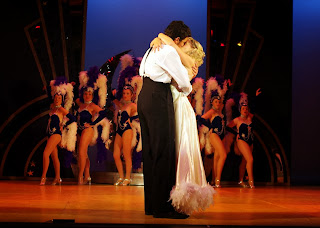 Based upon a 1930s show by the same writing team this 1992 Gershwin musical firmly belongs in that glamorous, old-fashioned, pre-war period in both content and style.  The thin, predictable plot - everyone falling in love at the drop of a hat, bursting into big-chorus song and dance numbers every five minutes, lots of tap dancing and girls in short skirts with bright white smiles - fits in perfectly with other 1930s musicals; Anything Goes, 42nd Street, Top Hat.  Yet in 1992 Broadway was filled with the new wave of British musicals - Phantom, Les Miserables, Cats, Miss Saigon - and this typically American story, full of dancing and sentimentality, was a welcome return to the traditions of the "Musical Comedy".

Following a London revival in 2011, CAODS have chosen to present this energetic musical still warm from the West End and have appointed the reliable talent of Sallie Warrington to the Director's chair.  Sallie's ability to inspire the best from her cast shines through the mixed talent on stage, but it is her ideally pitched choreography for the glorious group of ladies making up Zangler's Follies where this production really succeeds.  Without exception this chorus of dancers ooze poise and elegance, sing beautifully, and with just the right number of them to ensure the stage is never overcrowded they have room to throw themselves into the more energetic tap numbers with genuine accomplishment too.

Henri de Lausun plays Bobby Child with assurance and skill.  His singing voice is smooth and strong even through the vigorous tap dance routines which he also performs with flair.  His ongoing battle through Act 1 with a false moustache with a mind of it's own was handled with a twinkle in his eye and his professional attitude and determination certainly won the audience over at this opening night performance.  Christie Hooper is equally charming as the plucky cowgirl Polly, her superb voice a musical highlight especially in Act 1's "Someone To Watch Over Me".  Her stage presence draws the eye equally in the group numbers and she leads the company in "I Got Rhythm" with grace and ability.  Kevin Richards' heavily accented Zangler was difficult to understand at the very top of the show, but he soon found his stride and his duet with Bobby is one of the highlights of the production.  Karen Kelleher makes the most of Irene with a seductive performance of "Naughty Baby", and Jonathan Lloyd-Game is assured as Lank, if sometimes a little overdone.

The swift and various changes of location are well managed by the slick CAODS crew and the often bare stage maintains an unobstructed dance floor throughout.  The costumes for this show are a huge part of the overall feel of the production and the numerous changes for the chorus of Follies are all stunning - and importantly well-fitting - right down to the enormous feathered headdresses for the finale.  The music throughout is handled with care and skill, as always, by Musical Director Patrick Tucker and his consummate band.