THE WAR OF THE WORLDS - ALIVE ON STAGE 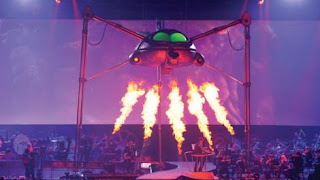 Jeff Wayne's musical version of
The War of the Worlds - Alive on Stage
Recorded at the O2 Arena
Cineworld, Braintree
Sunday 14th April 2013


"The chances of anything coming from Mars are a million to one, he said..."  Filmed in December 2012 in front of a sell-out crowd at the O2 arena, Jeff Wayne conducts a 45 piece orchestra in his epic musical version of H. G. Wells' science fiction story, The War of the Worlds.
Concert style, the orchestra are key and dominate the stage, impressive in scale and quality.  In this multi-media production however the space is well used, with high quality filmed scenes on a 100ft "animation wall", live action from a small cast of players, holographic interaction with the absent narrator, and an enormous alien robot complete with heat ray.
The narrator is played by Liam Neeson, filmed as part of both the animation wall scenes and as a holographic presence on the stage, interacting with the live actors.  His delivery is grave and absorbing throughout, and although there is just too big an age gap to be a convincing other half to Jeff Wayne's daughter, he otherwise fits the role ideally.  Marti Pellow is part of the live-action cast to sing the thoughts of the narrator, his powerful singing voice a testament to his many years now in musical theatre.  The Artilleryman is performed by Ricky Wilson of the Kaiser Chiefs, with impressive acting skills throughout the descent of the character's wits, and bringing his rock toned voice to a frenzied 'Brave New World'.  Parson Nathaniel and his wife Beth are played by giants of musical theatre Jason Donovan and Kerry Ellis.  Their scene together, facing the reality of the alien invasion as the Parson's belief that the devil is responsible takes over his senses, is a particularly absorbing section with both the strength of their voices and the weight of their touching performances captivating the huge live audience.
Filmed with delicacy of timing, camera changes were natural and never distracting, and while close ups of actors and musicians were plentiful not a moment of the many on-stage spectacles were missed.  A fantastic way to catch a show you've missed, although no real comparison to live theatre.
Posted by @LauraKathrynBen at 3:30 pm