EVENTS ON A HOTEL TERRACE 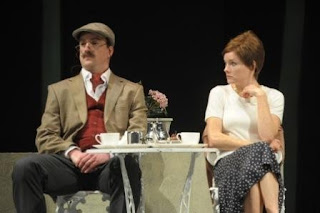 Events on a Hotel Terrace is one of four interlinked plays from Ayckbourn's Intimate Exchanges series that the Mercury have chosen to produce this season, exploring the intriguing theme of how the smallest decisions can have huge consequences on our lives and the lives of those around us.  A highly unusual concept, each of the eight plays in the full series follow the same set of six characters and each have two possible endings - 16 possible variations in all, although the Mercury have selected just four this time around. Each opens in the exact same way, and the various paths are branched out based on decisions made at key moments in each scene. To smoke or not to smoke that first cigarette of the day is that innocuous first decision, common in each production and upon which all outcomes depend.

Rarely staged, I imagine, due to the overhead of time needed by everyone involved. Time given over by a theatre programmer to stage multiple full-length plays from the same series in one season; time for the audience to attend multiple performances - although each technically stands alone, the only way to really appreciate the work is to see multiple strands of this story unfold; time for just one pair of actors to understand, learn and rehearse this vast undertaking - 16 hours of dialogue in all.  The Mercury have this freedom however, and are taking the opportunity to stagger stagings of each of their four choices across the season.

This piece concentrates mainly on Celia, the headmaster's wife, who smokes that first cigarette and is plagued by both a worrisome husband and obsessive love interest. Both cause this frantic woman frequent stresses and strains, forcing her to face difficult questions about her future.

Celia (and all other female characters, as both this play and the whole series develop) is played by a delightful Ruth Gibson, whose commanding stage presence is captivating in her various characterisations. She is ably joined by Gwynfor Jones in the male roles, who has the majority of quick changes in this show and handles them smoothly, switching many times between distinctive and enjoyable performances of each of his three characters.

An entertaining start to this series, and one that has successfully captured my imagination and curiosity - I look forward to seeing the other productions; A One Man Protest, A Pageant and A Game of Golf and discovering how these other variations unfold.