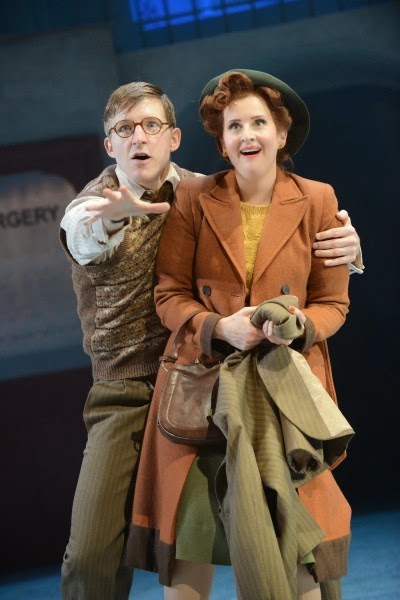 Betty Blue Eyes
Made in Colchester
Mercury Theatre, Colchester
Saturday 29th March 2014
Betty Blue Eyes began life in the West End in 2011, starring Sarah Lancashire and Reece Sheersmith, in a short lived but dazzling production that won over the critics.  Arguably not suiting a West End audience, this very British story follows the fate of one chiropodist and his wife in a small North of England town in 1947 - while rationing was still in force and the young Princess Elizabeth planned her wedding to Philip Mountbatten.  Based on the film A Private Function, the musical version by Stiles and Drewe concentrates on the illegally reared pig that is to be the subject of the town council's celebration banquet for the royal wedding.
With leading cast members straight out of the West End themselves, Haydn Oakley and Amy Booth-Steel are exemplary in their performances.  Beautiful voices and gently comic characterisations make their two characters, Gilbert and Joyce Chilvers, warm and lovable.  Joined by an ensemble filled with triple-threats, there is a surprising and very entertaining amount of dancing for the size of the production, which was all executed with excellence.
The Made in Colchester team have built a reputation for their production values, and the set, costume and technical aspects of this production are ideal examples of this.  The lighting design is particularly effective, with some lovely use of colour and a beautifully lit "dream" sequence during "Nobody".
Where the West End failed to maintain audiences for this charming celebration of Britishness, perhaps with its large percentage of tourist-based audiences, on a more local scale the show works brilliantly.  Set to embark upon a UK tour after this initial run in Colchester, the wit and style of this clever production will charm audiences around the country.

Posted by @LauraKathrynBen at 5:55 pm