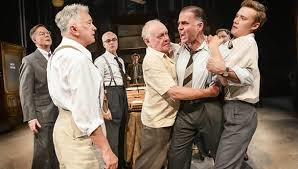 Reginald Rose's 1950s drama depicting the deliberations of an all-male jury on a murder case was most famously brought to audiences via the 1957 Henry Fonda film.  Originally written for television, the stage version was first seen in 1954 and has been faithfully revived in this new production at the Garrick, starring Martin Shaw.

The jury room set is intricately realised with the open walls to the bathrooms allowing constant view of the tense hours of decision making.  With little other furniture, the twelve-seater table clearly dominates the space, but an ingenious revolve - rotating so slowly the eye can barely see the movement - gives both a practical solution to the potential blocking hazard and a creative visual interest for the audience.

One of the joys of this piece for the audience are the deliberate gaps in detail about the twelve jurors.  Gradually we get to know their professions, some very minor details are revealed regarding home life, but we don't even find out their names.  It is a testament to the quality of the writing therefore, that each of these men are given individual, distinct and absorbing opportunities to develop, allowing the audience to discover each personality.  The success of this style however depends upon the skill of the actors to convey this gradual character development with enough control to maintain a consistent tension throughout.  This cast, led by Martin Shaw, has no weak link, with each actor portraying a true and intricate understanding of his own character in a plethora of intelligent performances.

As deliberations descend into arguments, facts about the trial are slowly revealed, and interpretations and opinions debated, each juror comes to understand more and more about himself as much as the importance of the term "reasonable doubt" which underpins the entire judicial system.  A fascinating piece that delves into the depths of human nature and displays both the power of the legal system and in doing so its inevitable weaknesses.  Tense, exciting theatre with some captivating performances - well worth catching.
Posted by @LauraKathrynBen at 7:45 pm