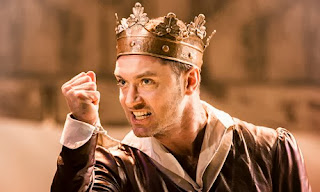 This final jewel in the richly laden crown of the inestimable Grandage season at the Noël Coward sees the run of five productions play out with a bang. Having been privileged enough to see all five star-studded shows over the last year, it is clear that Grandage's directorial vision and careful choices of clarity and design have matched up to the expectations delivered by his A-lister leads.

There is little doubt that the majority of the audience have been drawn to this production not for the opportunity to see a play by the world's most celebrated playwright, acted in the city in which he worked, about one of the country's most successful soldier-monarchs. Instead the draw for this sell-out winter production is Hollywood heartthrob Jude Law, playing the war-hungry and charismatic King Harry. Law's Shakespearean credits most notably include his 2009 Hamlet at the Donmar, transferring to the West End and then for a week in Denmark's Elsinore Castle itself before enjoying an additional Broadway run. His characterisation of Henry V is compelling, drawing out the proclaimed ordinariness of the soldier, a monarch more accustomed to the battleground than to courtly splendour. His passionate "Once more unto the breach" speech makes convincing work of rousing the troops, bettered only by the carefully directed "Band of Brothers" scene bringing a patriotic lump to the throat on the eve of St Crispin's day. His playful wooing of the French Princess in Act 2, regally played by a beautiful and poised Jessie Buckley, adds another dimension to the grounded King and Law once more achieves a convincingly charismatic performance.

The supporting cast hold some equally captivating characterisations, with several of note, although none achieving less than an entertaining and convincing portrayal. Ashley Zhangazha as the explanatory Chorus maintains immaculate clarity that displays a true depth of understanding, and his impassioned delivery is absorbing and extremely entertaining to watch. Matt Ryan's Fluellen is also excellently played, displaying a careful comic timing without the need to play for laughs, relishing his leek scene with the deliciously unpleasant Pistol, played by Ron Cook.

This is a Henry V well-pitched for first timers; there are cuts aplenty to which the relatively early finish time will attest, and which may not satisfy the Shakespeare purists, but it helps to keep the pace and intensity manageable for all.  No prior knowledge of the true history of the period is assumed, this was generations earlier than Shakespeare's original audience would have known too, yet the precision and understanding of the entire cast gives an easy clarity to this historical piece. Grandage's ability to make the potential challenges of the Bard's verse easily accessible to a modern, unaccustomed audience is absolutely key to this production's success and his hand can be strongly felt throughout.


A wonderfully entertaining and successful finale to what has been an exciting season from Michael Grandage.  He seems to have achieved his aim, to attract new, younger audiences to West End plays through both head-turning casting and affordable ticket pricing.  Long may this attitude remain.
Posted by @LauraKathrynBen at 7:30 pm