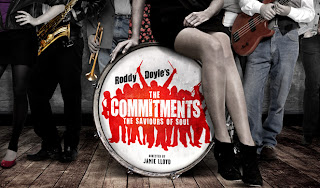 Roddy Doyle's original self-published novel of the late 1980s became a cult hit, telling the down to earth story of a group of unemployed Irish youths filling their time in the Dublin streets by creating a band.  The life-affirming tale of Jimmy Rabbitte and his ragtag group of amateur musicians captured the imagination of a society who recognised the characters and their plight all too well.  The success of the novel gave rise to a hit film in 1991 and is now being revisited as a brand new musical written by Doyle himself.

The opening flies by understandably swiftly, opening as it does without the band assembled, and after a hasty couple of scenes as the group gather the party can really get started.  Party being the operative word - this show is like on big Irish craic all the way through, hugely fun and unarguably feel-good.

This is truly an ensemble show and the members of the band work excellently together with relationships shining through.  They generate a camaraderie that is entirely infectious and reaches out to include the whole audience as part of the gang.  There is however an absolute standout individual performance from the spine-tingling Killian Donnelly as lead singer Deco.  The unpredictable ego of the group, his performance is at times hilarious, charming and touching in equal measure and his voice is total rock perfection.

A funny, entertaining, life-affirming show that leaves your toe-tapping and a smile on your face - what more can be asked for…


See below for an interview with Killian Donnelly and Denis Grindel by officialtheatre.com ...