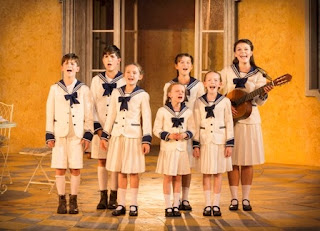 The Sound of Music
Regent's Park Open Air Theatre
Regent's Park, London
Saturday 27th July 2013
It is difficult to believe that there is anyone in the world who hasn't seen The Sound of Music in all of its Julie Andrews twirling, Saltzburg glamorising, high-on-a-hill yodelling, film version glory.  No matter how familiar however, there is more than just the additional couple of songs that make the stage musical version feel like a fresh, exciting and almost new experience.  Put that stage version on the Regent's Park Open Air Theatre stage on a bright summer's afternoon, fill the cast with talented and energetic performers and speckle the audience with some awestruck children at their first live show, and once again we experience a couple of hours of magic in the middle of one of London's busiest parks.

The set is necessarily sparse and cleverly multi-functional; the central double doorway changing from curtained french doors, to an oak panelled hallway, to the abbey's iron gates.  Along with a few items of furniture, these small changes transform the set and easily send our imaginations to the various locations with entirely seamless transitions.  The moat is also a charming addition, allowing the children to make a fun-filled entrance on their return from play with the splashes a welcome side effect for those in the front row under the scorching heat.

Maria is played with utter charm, compelling energy and a beautiful voice by a glorious Charlotte Wakefield.  Her characterisation is ideal, portraying the youthful innocence, headstrong will and conflicted love all with equal passion.  Her stubborn, strong and gorgeous Captain Von Trapp is given an excellent interpretation by Michael Xavier.  Younger than a traditional casting he carried the role of experienced naval Captain with strength and ease.  The classic "Climb Ev'ry Mountain" is sung with breathtaking power by Helen Hobson as Mother Abbess, bringing a tear to the eye, and the two songs not from the film are performed in an entertaining partnership by the two Viennese visitors, Caroline Keiff as Elsa Schraeder and Michael Matus as "Uncle" Max.

As ever with this show it is the casting of the Von Trapp children that will make or break the production, and at this performance Regent's Park have offered up a show-stealing group.  Among the faultless septet of siblings particular note must go to Isabelle Allen - one of the most recognisable little faces of last year having starred as young Cosette in the Les Misérables film - who gave an honest and utterly charming portrayal of the opinionated Brigitta.

Despite the forecasted storms we managed to remain almost entirely dry - if actually a little sun scorched - and were once again reminded that the unique experience of such high quality productions in the middle of one of London's busiest parks is deserving of being on every summer visitor's to-do list.  Magnificent.
Posted by @LauraKathrynBen at 2:15 pm