CADFAEL: THE VIRGIN IN THE ICE 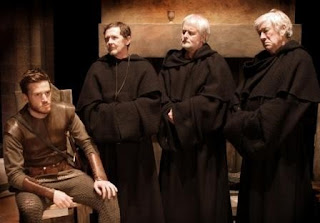 An intreguing character, Cadfael is a Benedictine monk with a colourful history, who turns his hand to 12th century detective work; the Miss Marple of the 1100s.  Created by Ellis Peters in her series of 20 novels, he was immortalised on screen by Derek Jacobi in the mid 90s, and now graces the stage for the first time.

The set design is ambitious and at times beautiful, especially at the opening  with split scenes between the snowy foreground and the monastry behind being framed with a rich depth.  The snow effects used frequently throughout look effective, although the machine is distractingly noisy despite attempts to cover with a stormy sound effect.  At one point the stone table housing the dead girl was set backwards, displaying to the audience the inside of the hollow wooden box rather than the realistically decorated front panels.  This may seem minor, but at such a pivotal moment in the play when we are being introduced to the title subject and discovering her identity, the audience's attention was subconsiously drawn away from the action.

The episodic narrative of the story does not neatly lend itself to a staged adaptation and, although when achieved the scenes did look impressive, the many changes of scene and location were slow and far too frequent.  In an involved storyline, the audience need more time with the characters to distinguish relationships and discern the plot, and the actors needed more stage time to build their characterisations and tell the story.  Instead the result was a bit perfunctory without the detail and historical colour one receives on the page.

There were moments to enjoy, and for fans of the Cadfael series it will be interesting to see this story brought so energetically to life.  I wonder if, however, the television series was the more appropriate medium.  Without a more major adaptation of the original story, to lose the such frequent changes of location and centralise the action, a stilted stage version will not be slick enough to captivate a live audience.